How to Overclock a Laptop For Higher Performance

Overclocking is the process of increasing the clock time of your CPU and other components of computers and laptops to increase the performance. Every laptop and computer have processors with their speed. It is pushing the memory and CPU of systems beyond their limits. Many processors are easy to overclock by adjusting the different settings of your motherboard’s UEFI BIPO. Only this way one can have better performance of our systems. This post explains the steps on how to overclock a laptop. The steps might be different on your laptop as it has a different motherboard and settings.

As much this idea looks engaging and fantasizing, it is not that much easy. There are certain flaws in overclocking. If you do not handle it properly, then your system may crash and even damage. 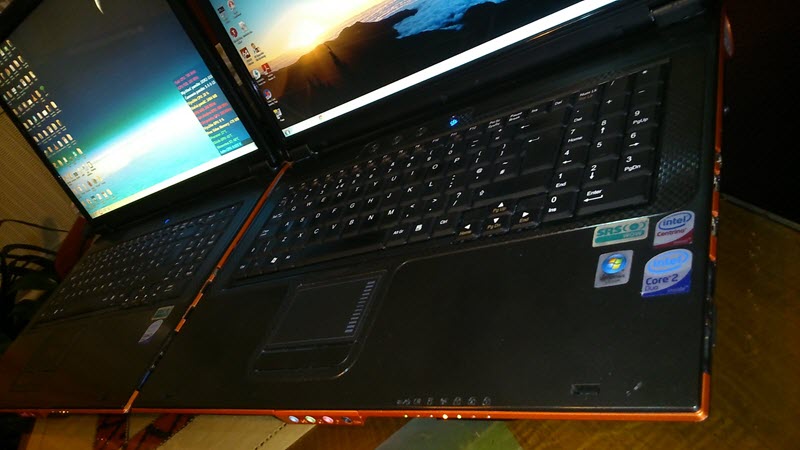 While overclocking there are few things the user must know beforehand to avoid the problems later on. For not, all the processors are the same and can’t be overclocked easily. For example, most of the CPUs manufactured by Intel are locked from starting to prevent users from changing its performance. This is because most of the users buy such CPUs and after overclocking sell it in the market at a higher price. Some processors that are identified by K or X suffix are sold by the company unlocked and hence can be overclocked easily.

However, this is not it; you might have heard of the term “silicon lottery.” If not then let me explain. The processors are the different chunks of silicon and electronics. Therefore, it is not necessary that every processor of the same model can tolerate the higher operating speed. In many cases, they did not work that efficiently and failed to show higher performance even if have the same specification.

When you overclock the processor, it produces more heat thus, heating up the system. If you feel your system more heat up than normal, then you should turn off instantly to avoid any damage since the components are very expensive and sensitive to heat. So if you overclock your laptop then make sure to keep a balance of speed and heat.

The CPU coolers that come with the many processors may cause trouble. You will need to upgrade your cooler to get a better cooling performance. There is multiple air cooler for laptops available in the market that pumps the coolant over the CPU and extracts the heat from the system.

Before jumping to overclocking, you should know about the basic stuff about the laptop’s processor.

The main thing to know is that the CPU has the ultimate clock rate and all other clock rates are its derivations. It will not be an understatement if we say that this clock rate is the standard timekeeper and in Intel series, it is called base clock or BCLK. The various sections in the processor multiply this time to get the internal clock speed of that particular section.

Confused? Don’t worry, through the example, you will get a clear view of the basics of the processor. Suppose we have Core i5 750 CPU. The BCLK of this CPU is 133MHz and rated speed is2.66GHz. What main processor does is, it takes the BCLK number and multiplies it by 20 to get 2.66GHz that is the speed of the processor. Moreover, in the latest Intel’s CPUs there is a unique feature called turbo boost. It allows the CPU clock to run at a faster speed than the default speed. However, it is only possible under certain conditions.

How to Overclock a Laptop? Overclocking the laptop by Manual Approach

Now moving onto the process of overclocking, there are several ways of overclocking. The automatic, semi-automatic and manually. All these can be used for increasing your PC’s performance, but here we will see how the laptop can be overclocked using the manual approach. 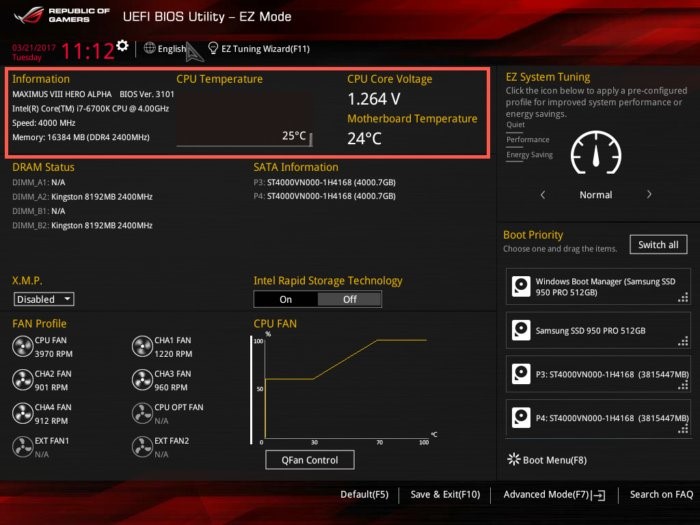 For practice, here we have Asus Maximus VIII Hero Alpha motherboard with an Intel Core i7-6700K processor. Though the steps that I am going to discuss may not be exactly the same for every hardware. However, the principles remain the same.

The first thing you need to do is install the latest BIOS software for the motherboard. Make sure to download from the manufacturer’s site so that you will not miss out important features and updates. Once you have installed, boot up your laptop to access BIOS by pressing F2 or Delete button at startup.

In the screenshot below you can see that the processor is running at the frequency of 4GHz and has Max Turbo feature that increases the speed to 4.2GHz. The temperature of the CPU is 25 degrees with a voltage of 1.264V when it is not performing any work.

Now click F7 to go to advanced mode. Now you can see at the right side that there are two additional settings. The BCLK is currently set at 100MHz. just below that, there is Ratio setting. Many people call it, the multiplier. Here the processor speed is 4GHz i.e. BCLK multiplied by the ratio (40). 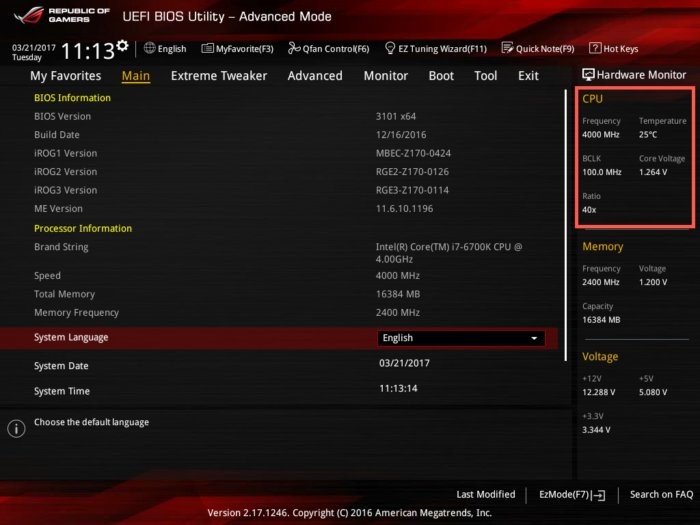 We can change and adjust the BCLK and ratio settings. The modern motherboards come with automatic settings to overclock the laptops more easily. 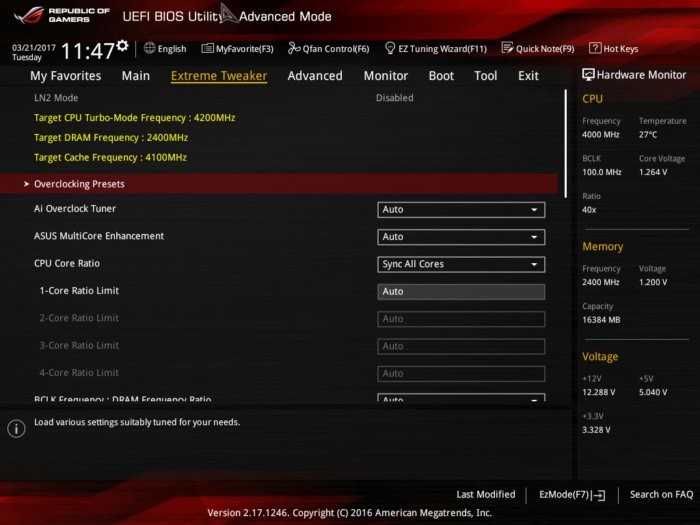 In the Asus Extreme Tweaker menu, all you have to do is switching the “Ai Overclock Tuner” from automatic to manual. It will give you access to the base clock frequency settings. 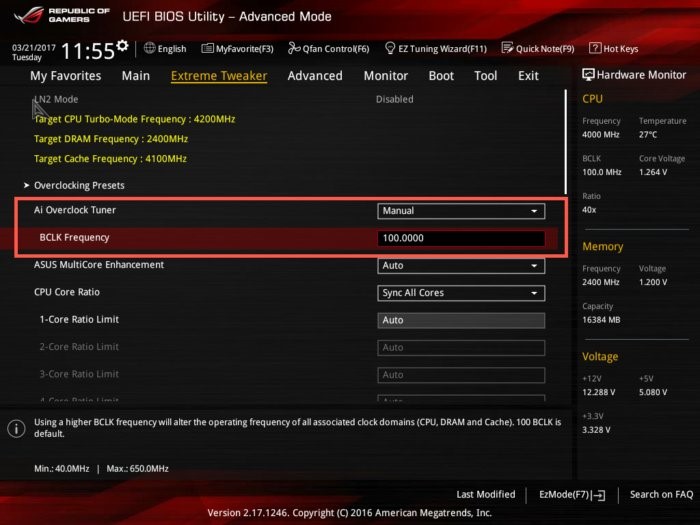 Now you can type the value in the BCLK frequency field. However, before doing this have a look at the CPU core ratio below that will allow you to adjust the multiplier or ratio. However, some motherboard allows you to apply changes to one processor. Because applying the same overclocking to all your processors can make your laptop unstable and even cause damage. 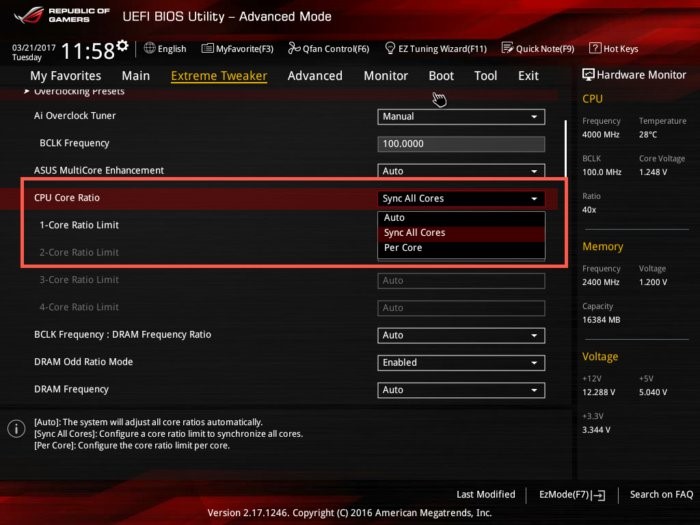 Now set the CPU Core Ratio to anything except auto. However, it preferred to set it to per core. Moreover, you can type values. 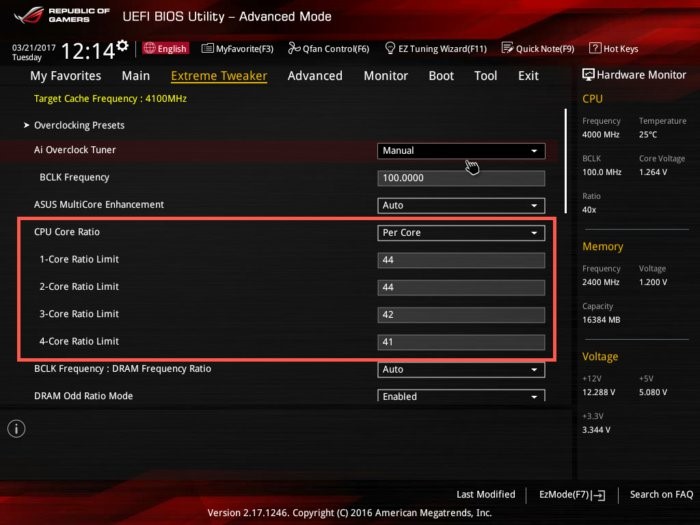 Wrap-up on How to Overclock a Laptop

The steps mentioned above are the manual approach towards the overclocking. However, the process did not end here. There are certainly other things that you can manage manually. However, for now, we have described the basic steps. Hope this would help you to figure out how to overclock a laptop whenever needed.

How to Disable Laptop Keyboard on Windows and Mac Laptop

How to Check Laptop Temperature?

How to Charge Laptop with HDMI, is it Possible?

What to Do if the HDMI Port (Connection) is Not Working on a MacBook pro?

We will be happy to hear your thoughts

Best Laptop for Live Streaming in 2022 (on YouTube, FB, Twitch)